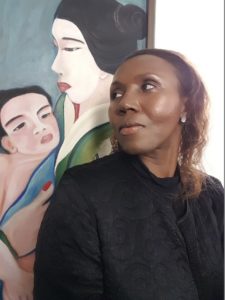 Colette Brésilla is a Haitian-born painter, textile designer, and sculptor who studied at the School of the Museum of Fine Arts, Boston MA, where she lives and works. Brésilla is a believer in the arts as a form of transformative healing and considers herself a cultural worker for social change. Indeed, she views her role as an artist as that of a shwal, or spiritual vessel, as it is known in Haiti.

Colette maintains that the act of creating art often channels responses to the world we live in, by expressing the joy as well as the horror of the current state of social, political, and economic affairs. Her paintings, rich with saturated colors and an idiosyncratic iconography, and her sculptures, with their totemic allusions, reflect a wide scope of spiritual and cultural references, resulting from such realities that convey both the sweetness and bitterness of our everyday lives. Her inspirations are drawn from meditation, certain genres of music, reading, and observations of the interactions of people. Concentrating on the female figure—especially with disarming interpretations of the Japanese geisha, filtered through her perspective as a Haitian-born artist—she explores and explodes traditional conceptions of women, presenting the viewer with compelling figures who both appeal to and confound them.

Like many bi-cultural artists before her, Brésilla has successfully interwoven the strands of her personal cultural origins with the fabric of her new environment. The American artist manifests in the studied refinement and control of brush strokes, the boldly customized nature of colors and political exploration. The Haitian artist is evident in her preoccupations with the cosmos, the complex representations of the Lwas, or the deities that pervade Haitian culture.

Colette works have been showcased extensively in numerous American and international institutions, including galleries, museums and universities, and are housed in a variety of permanent corporate and private collections. As a “borderless bird,” Brésilla especially values the time she has spent in places such as Togo, Côte D’Ivoire, and Europe, particularly Paris.  Through absorption and integration, these vivid visual cultures resonate within the intense visual vocabulary of her work.

Corporate and private collections in more than 20 countries.